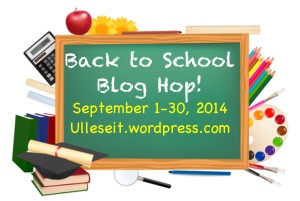 THANK YOU to all the bloggers who hosted my Back to School Blog Hop! It was quite a heady month, reading all those new reviews, and I enjoyed the interviews, excerpts, and character interviews, too. To finish off the month, I’d like to share a new review from Amazon:

By Dii TOP 500 REVIEWER
Format:Kindle Edition
Do you have a strong female role model in your life? I’m not talking about household names in the fight for women’s right to burn bras, I mean the everyday type, an ordinary woman with extraordinary strength, who lends strength to others to push beyond their comfort zone and spread their wings. Linda Ulleseit’s Under the Almond Trees is the story of the true grit and tenacity of women who struggled to be recognized in the male-dominated world of the mid-nineteenth century on up to the mid-twentieth century. Some wanted to be recognized as capable of running a business, to vote, to be allowed to choose what life they wanted to live and to be allowed in flourish in careers afforded only to men.Ellen VanValkenburgh was forced to be an independent woman upon the death of her husband, yet, in 1862, women were not allowed to vote, run businesses or become much more than elbow dressing on a man’s arm. Who would support her family, if not her? Who would stand up for the rights of women to be considered citizens? Instead of waiting for someone to step up, Ellen did so, herself, imprinting her belief in the right to choose on the female members of her family. Her legacy is passed down through the generations, as was her support and advice, as descendants take up their own crusades for the right to choose the path their lives took.

Are you looking for an inspirational read with a true-to-life historical feel? How about something to inspire a young woman today? Linda Ulleseit has brought history to life through her characters, her vividly depicted world and the atmosphere she has created with her words. What we would consider as archaic thinking only changed because of ordinary women with the fortitude to stand up and buck the system, over and over. I was lost in this world, living it, and horrified to actually feel how these women felt. I didn’t feel the need to raise a banner to a cause already fought, but I feel an eternal thankfulness for the pioneers depicted by these brave women. An excellent read, well-written, from a powerful wordsmith.

If that doesn’t top off a great month, what does? If you missed any of the posts during my blog hop, or you just want to check out the other blogs, you can find a full list of links here.