Happy New Year! I hope you were able to read a bunch of new historical fiction in 2021 and are looking forward to a new year of new books. My top five January picks are all about favorite authors and beautiful covers.

Her Hidden Genius by Marie Benedict

“Fans of historical fiction will devour this complex portrait of a brilliant and trailblazing genius and the price she paid to advance the frontiers of science.” —Beatriz Williams, New York Times bestselling author of Our Woman in Moscow

Rosalind Franklin sacrificed her life to further our understanding of DNA, yet her contributions are overshadowed by the men around her. Marie Benedict is one of my favorite authors who writes about accomplished women in history. I can hardly wait to read this one! (Release date January 25)

“This sweeping novel from the New York Times bestselling author of A Long Petal of the Sea tells the epic story of Violeta Del Valle, a woman whose life spans one hundred years and bears witness to the greatest upheavals of the twentieth century.” –book description

I love the emotional epics written by Isabel Allende, and this one promises to be a good one. Set in South America, it includes the Great War, the Depression, and the Spanish flu epidemic, all woven around Violeta, the first daughter in a family of five boys. (release date January 25)

“Downton Abbey meets Agatha Christie in this witty and twisty mystery.” —In Touch Weekly on The Mitford Murders

This novel is the fifth in a series of murder mysteries that I haven’t read. It appeals to me because of the cover design. Set in Spain just before the war, the Mitford sisters are hired to search for the Communist sister of a novelist. (release date January 18)

The Queen’s Lady by Joanna Hickson (pictured below)

“Intriguing… told with confidence.” —The Times

This cover is another that attracted me to the book, which is the second in the Queens of the Tower series by Joanna Hickson. It follows Joan, lady-in-waiting to Queen Elizabeth, as the Tudor court mourns the death of the Prince of Wales, and a year later the queen herself. I enjoy novels that focus on little-known women with more well-known historical events going on around them. (release date January 20)

The Magnolia Palace by Fiona Davis (pictured below)

“Another brilliant historical thriller from Davis, this time set in a Gilded Age mansion in New York City. You will fall in love with Lillian, the penniless young artist’s model surviving the Spanish Flu of 1919, and Veronica, the young mod model of the 1960s, and Davis’s deftly written and beautifully woven feminist storytelling.” —Tara Moss, #1 internationally bestselling author of The War Widow

A dual timeline novel set in the fabulous Frick mansion in New York, this story begs to be read. The past storyline promises romantic trysts, stolen jewels, and deep family drama. The 1960s plot features hidden messages in the museum at the Frick house. Nothing is better than a dual timeline story with great plots in both timelines. (release date January 25) 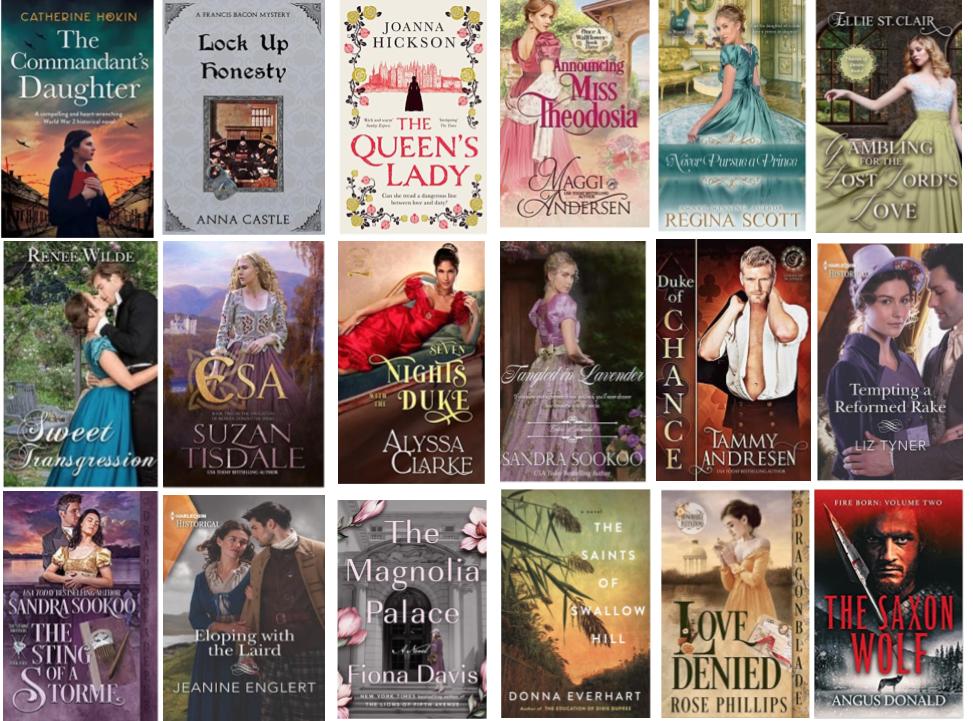 Gambling For the Lost Lord’s Love by Lillie St. Clair

Seven Nights With the Duke by Alyssa Clarke (January 22)

The Sting of a Storme by Sandra Sookoo (January 18)

Eloping With the Laird by Jeanine Englert (January 25)

The Saints of Swallow Hill by Diana Everhart (January 25)