HISTORICAL NOTES FOR UNDER THE ALMOND TREES

UAT is a novelized account of three real women, all related to me. I have tried to remain true to the events of their lives as I know them as well as to the times. Here are the historical facts. All else is my invention, with no intention of casting aspersion on any living relative of these individuals.

Ellen Rand Perkins (1827-1922) was born in New York City. Her father, Joseph Perkins, graduated from Williams College in 1814. He worked as an engraver in Massachusetts

She did, indeed, marry her cousin Jacob. He and Lucian Curtis did travel to California for the Gold Rush aboard the Apollo. They mined at Mormon Island, situated where the North and South Forks of the American River join on the route from Sutter’s Fort to his sawmill at Coloma. It was one of the earliest mining camps set up after the discovery of gold at Sutter’s Mill. Six weeks after the initial discovery of gold a small group of Mormons, originally employed by Sutter to work his mill, was mining gold at Mormon Island. By summer of 1848, the camp had over a hundred men. For quite some time, the miners were required to tithe one-tenth of their earnings, to the Mormon Church. Jacob got sick ‘in the mines’ and Lucian Curtis was bringing him out of the mines to Mormon Island when he died during the trip. Mormon Island now lies at the bottom of Folsom Lake.

Ellen did wear black for the rest of her life after Jacob died. The account of her trip to California comes mostly from a transcription of Ellen retelling the story to her grandchildren. Place names and details were added from my research. She married Henry VanValkenburg in 1853 and bore him three children, the third delivered after his death. She did run his mill while pregnant with her son, but the details of her doing so are my invention.

Henry VanValkenburgh was involved in some nefarious business with Wells Fargo in San Francisco before his move to Santa Cruz. He began construction of the San Lorenzo Paper Mill on June 1, 1860 and was in full operation by 1861. Most of its paper was sent to San Francisco. Unfortunately, the winter storms of 1861/1862 were terribly destructive, and Henry, accidentally killed by a falling tree, left his wife Ellen and their three children destitute. She was a strong woman and tried valiantly to run the operation; however, the Mill had to be auctioned off by the end of 1862. It changed hands several times in the following years, eventually coming under the control of John Sime, a San Francisco banker and partner in the California Powder Works. Under his direction the Mill produced 250 reams of paper a day and employed about 60 men. When Sime died unexpectedly in 1872, the Paper Mill was sold to the California Powder Works operating just upriver, for $20,026 at auction. This allowed the California Powder Works to expand. It lasted until 1914 when it was abandoned. The Masons bought the property in 1924.

The lawsuit Ellen VanValkenburgh brought against Santa Cruz, and the inclusion of that event in Susan B. Anthony’s speech that year, actually happened. The people surrounding Ellen, although some share names with people who existed there at that time, are invented.

Ellen’s home at 16 Union Street burned while she was visiting her son in Hayward. in 1945, John Balsiger built a house on that site for $6,000. Although Ellen was alive when women received the vote in California, and she registered to vote, I have not been able to determine if she ever voted. I like to believe she did. 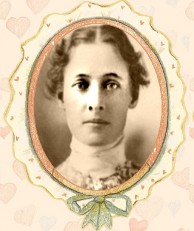 Emily Eolian Williams (1867-1942) was born in You Bet, a mining town in California. Her father, Edward Williams, was born in Bath, England, the illegitimate son of a ‘person of nobility.’ Her mother was born at Fort Snelling, now in Minnesota, to the sutler of the fort and his wife. Emily, her twin brother Ed, Edith, and Nina were all born in different mining camps. All four of them had asthma and carried kits to help them breathe. Her father created an elaborate aqueduct system, the 16’ Williams Ditch was part of his system, to bring water to the miners for hydraulic mining. Emily’s mother died in 1870 and her father remarried in 1873. The new family moved to San Jose, where her father became president of the San Jose Water Works. Lake Williams, a reservoir holding 1,700,000 gallons of water, was named for him. It no longer exists.

She did teach school and attend Stanford the year it opened. California School of Mechanical Arts, where she studied architecture, is now Lick-Wilmerding High School. Emily was an instructor, then manager, at Wheeler & Wilson sewing machine company in 1903.

The details of Emily’s life and career are well documented in San Francisco, Santa Clara, and Santa Cruz County newspapers of the times. Although it was very common at the time for women to have very close relationships with each other, according to Phyllis Williams, who married Emily’s youngest brother, Paul, Emily and Lillian Palmer were lesbians. Her family’s attitude toward her career and relationship are my own invention. Although she indeed was mentored by Bernard Maybeck and worked at the same time as Julia Morgan, my account of those relationships is fiction. No pictures exist of the pavilion designed by Emily and Lillian for the Pan Pacific International Exposition, but many of the homes Emily designed still stand. A good resource for her architecture is Early Women Architects of the San Francisco Bay Area by Inga Schaefer Horton.

Eva VanValkenburgh Walters (1899-1977) was born in Cholame, California. Her father

was Henry VanValkenburgh, Ellen (Rand Perkins) Van Valkenburgh’s only son, born after his father’s death. Eva’s mother was Emily Williams’ sister Nina, who graduated from San Jose Normal School in December of 1884. Her early life in Cholame, Santa Cruz, and Inverness follows my novel with regard to dates and family who were present at the time. She did marry Edward (Teddy) Walters after meeting him as a pen pal and corresponding with him. According to Phyllis Williams, who was a very dear friend of hers, Eva’s marriage was not happy and Edward was arrogant. From a journal I have of Eva’s, I know she was a bit of a dreamer. I speculate her Teddy was too practical and old-fashioned for her, but that is my opinion.

Her entire life, Eva loved gardening and photography. In her later years, arthritis and broken hips prevented her from these activities. She enjoyed going with her grandchildren, in the 1960s, to the beach in Santa Cruz. She always wore all black, including black hat and heavy, orthopedic black shoes. The incident at the Casa Del Sol Retirement Hotel where she hid a man in her bathroom actually happened.

By the time I knew my grandmother, Eva Walters, she was just an older relative who came for Thanksgiving with my Auntie Sheila. I was too young to appreciate stories of her life. At the end of my novel, I created the scene where Eva begins to pass on the rich legacy of strong women in her family to her granddaughter. I only wish she’d lived long enough to provide real details to fill the holes I had to fictionalize!

These are not the only strong women in my family. Ellen Rand Perkins’ sister, Coelia, owned a dress shop in SF. She holds patent #187,358 for an improvement in under garments, issued feb 13, 1877. Coelia’s daughters, Leila and Mary, opened a woodcarving shop for women in San Francisco. Mary (Curtis Richardson) went on to become a famous Impressionist painter referred to as the Mary Cassatt of the West. Ellen Rand Perkins’ cousin Eveline, was a lifelong friend of Mark Twain and might have married him, but her father made it clear he did not want a ‘Western rough-neck’ for a son-in-law. She married the great painter, Abbot Thayer, and lived in an art colony where Mark Twain spent his summers for years. And that’s just my father’s side of the family!